Why I never “battled” cancer

I often notice the words people use to describe people with cancer.“She is battling cancer.” “ He lost his battle with cancer.”“His fight against cancer.”After my own diagnosis, many told me to “fight” this cancer, that I “can win”. It felt as if I was suddenly in a boxing match that I could win if I only could only “fight” hard enough. At first I thought, “Good news! If I only fight hard enough, I can be healed!

I’m terrified here. I’m alone. I need to fight for my life…I’ll do anything! I’ll fight. Just tell me what to do. I’m ready.”

So I put my gloves on, took a crouching position to protect myself and squinted. I looked around to have a look at the competitors who were…..me and…me again!

In one corner was a healthy part of me and in the other corner, there was the cancer that may be in my body, which is also me.

It got me thinking…who is my opponent? Who is the enemy? In both corners it is only ME. I looked around and could only see my own body. There was no enemy, only my own body. I realized there was nobody to fight. So I took the gloves off. And took a long, deep breath.

Then something unexpected happened as I released from the crouching. I no longer felt alone and terrified. I slowly began to smile more. I even danced. Almost every day.

By knowing that I did not need to fight my body no matter what its condition may be in, something deep began to relax inside. I felt a wonderful acceptance. Then, a lightness came. I felt an openness surrounding me. I felt support all around me. And most of all, I felt love.

There was nothing to fight, fix or change. I felt like my own best friend.

They looked very intimidating. I was terrified. But I still kept the gloves off.

Then I had one of the most beautiful experiences of my life: I dared to look at cancer straight in the face. I was terrified but knew I had to listen. I felt it had something to teach me. So I listened. Humbly. It expressed much sadness and hurt. And it was angry; the same way children get angry.

Cancer was not the monster I had imagined. And it was certainly not the enemy. It was a part of me that reminded me of small little boy who was sad and lonely. And ran away from home.

More than ever, fighting was not the right thing to do. How could I fight someone who’s sad and lonely? Sad and lonely needed a friend.

I knew after that listening experience that I needed to make some radical changes in my life.

There was no room for compromise. I needed to live life to the fullest! I needed to respect what that ill part of me longed for. Not easy, I tell you. Why isn’t that easy, you may ask? Because what we long for is often not what others would like us to do. And being a pleaser, this was especially difficult for me. 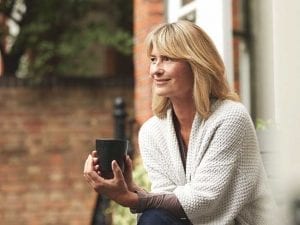 I still need to remind myself every day to listen to only me and nobody else.

I do this by staying very close to myself. Because there are a lot of voices out there in this big world.

I have to listen very closely, because my body is so gentle and loving…it only whispers.

I now trust that listening to my deepest voice can only lead me to health and deep love. It already has.

By listening, I am getting to know parts of myself I didn’t even know were there. And I like those parts. They are love. Love is always with me, no matter what. Cancer or no cancer.”

Jivan, born to Greek parents, grew up in Montreal, Canada where she studied Arts. She now works and lives in Stockholm, Sweden and the Greek Island of Crete where she offers Counseling, Meditation, Relaxing Massage, Star Sapphire Energywork sessions as well as Family Constellation workshops. Jivan is also an ovarian cancer survivor.

In under 12 minutes listen to this audio to strengthen the connection with yourself while you cultivate resilient boundaries.
This free meditation is for you if you find yourself regularly in: